LASIK (laser assisted in-situ keratomileusis), the most common laser vision correction procedure performed today, can correct a wide range of conditions, including nearsightedness, farsightedness and astigmatism. Using a highly accurate, cold-beam excimer laser, LASIK surgeon, Dr. Michael Furlong, reshapes the cornea (the clear window on the front of the eye) to focus light rays directly on the retina. Learn more about how reshaping the cornea affects the eye’s ability to focus.

During LASIK surgery, a thin corneal flap is created with a laser. The corneal flap is gently folded back and the excimer laser uses pulses of invisible ultraviolet light to gently reshape the internal tissue of the cornea. Each pulse of the laser removes only a very small amount of corneal tissue – about 1/500th of the thickness of a human hair. The laser is guided by the VARIO Topolyzer Map created specifically for each individual eye. The laser has several safety features programmed into the software and will not energize unless the reference points in the corneal surface and iris exactly match those in the patient’s surgical map.  Also, the surgeon has full control of the laser and can turn it off at any time. 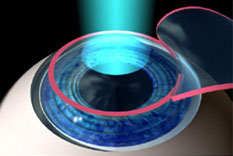 Once the cornea is reshaped, the corneal flap is replaced in its original position where it adheres quickly and seals itself without the need for stitches. The surgery only takes about five minutes per eye and there is very little discomfort during the surgery and after surgery. Typically, LASIK patients see well enough to drive and return to work the day after surgery.

Print Out Our LASIK Brochure

PRK (photorefractive keratectomy) and LASEK (laser epithelial keratomileusis) are both advanced surface ablation procedures used to correct vision by using the excimer laser to shape the surface of the cornea, rather than the interior. PRK was the first FDA-approved procedure changing the curvature of the cornea with the excimer laser. Safety and clinical data on the first PRK surgeries date back to 1990. 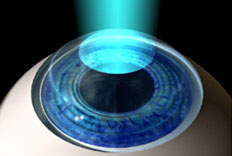 To assist the healing process after PRK, a clear bandage contact lens is placed over the cornea during the three to five days needed for the epithelium to re-grow. Additionally, patients are normally placed on a regimen of steroid eye drops for about a week, but may occasionally have to use them for one to three months, requiring monitoring by the doctor on a weekly or monthly basis. PRK only takes about five minutes per eye and the surgery itself is painless. There is typically more discomfort during the healing process after advanced surface ablation procedures and it takes a bit more time for the patient to see clearly, but in the end, outcomes for LASIK and PRK are the same.

There are some medical conditions that may make PRK more suitable than LASIK. PRK, for example, is used mostly for people with thin corneas since LASIK requires more corneal tissue to be successful. PRK is often preferred for patients who may be susceptible to dry eyes since dry eyes are more often a complication of LASIK. Dr. Furlong will help you determine which procedure is best for you.

Conveniently schedule a free, no obligation initial LASIK consultation online – by directly selecting your appointment day and time or call . THIS IS FOR LASIK CONSULTATIONS ONLY – Please call our office to schedule a cataract or medical eye examination.

Save time by completing the LASIK Patient Information Form and bring it with you to your appointment.

Make an informed decision by learning key points at your appointment: