Dr. Furlong started the Gift of Sight program in 2002. This annual, charitable program provides comprehensive consultations, Advanced Topography-Guided Custom LASIK,  Photorefractive Keratectomy (PRK) procedures, Keratoconus treatment and post-operative appointments at no cost for up to 10 deserving individuals in strong need of vision correction. Furlong Vision Correction has received the Jefferson Award for the Gift of Sight Program – and to date – the program has donated more than $1,020,000 in procedures to over 160 recipients.

Since starting the program, we have worked with local, non-profit organizations to identify Gift of Sight patients including work2 future, Hope Services, The Cost of Courage Foundation, American Cancer Society, Make-A-Wish Foundation, Team Red, White and Blue and the Diabetes Society. Additionally, we work with our optometric partners to identify possible recipients and we also include deserving individuals who are nominated by community members.

Here are great videos from 2018 Gift of Sight recipients.

Videos from 2017 Gift of Sight recipients.

THREE of our 2019 Patient Stories 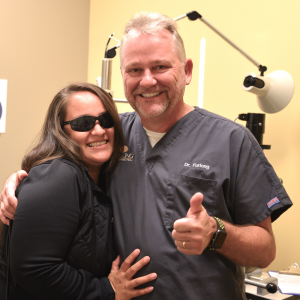 Brenda Manzo is a single mother of two. Thanks to the work2future program, she is currently a full-time student at the Center for Employment Training studying to become an electrician. Brenda was raised by alcoholic parents and hopes to raise her children in a happy and stable environment.

Here is more about Brenda’s story. 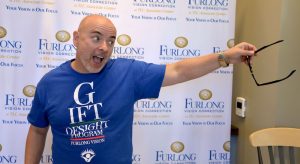 Joes Heeregrave, born in the Netherlands, is a former police officer, pastor, father of three and a community recipient. In 2009, he and his wife, Esther, gave up their careers and everything they owned to become missionaries. They moved to the Silicon Valley in March, 2019 to become missionaries and youth pastors at the Cathedral Of Faith in San Jose. Learn more about his story. 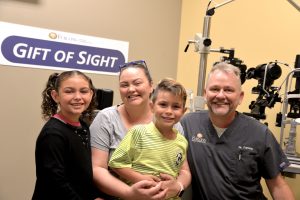 Sara Bartolino a Hodgkin’s Lymphoma survivor and mother of three, is deeply involved in the community. Her husband, Steven, included this quote when he nominated her. “Even while Sara was sick, she kept a positive outlook. That’s just who she is. This surgery would be life-changing for her. She is always worried about someone else and it would be awesome to give her one less thing she has to worry about.” Watch more about Sara’s inspiring story.

THREE of our 2018 Patient Stories 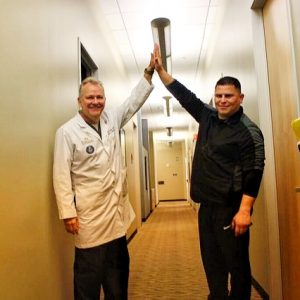 Leonard Vigil III, a San Jose native, served in the United States Marine Corp from 2001 to 2005. On July 1, 2004, Leonard was hit with a roadside bomb and suffered shrapnel wounds and traumatic brain and vision injuries but was able to help all the injured Marines and provide safety for them until they were medically evacuated. For this effort, he received the Purple Heart and the Marine and Navy Accommodation medal with a distinguished V for Valor.

He is very grateful to be a Gift Of Sight recipient and to the Cost of Courage Foundation for giving him this opportunity.

Here is more about Leonard’s story. 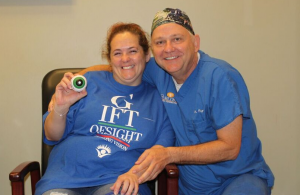 Christal Letizia grew up in Hawaii – one of 16 kids! She enlisted in the Navy in 1999 for four years active duty and four on reserve duty. While active, she served on the USS John F Kennedy. cv 67 the last nonnuclear, conventionally powered Navy air craft carrier.   Christal has had treatment for PTSD and her eyesight started changing after battling intracranial hypertension that put pressure on her eyes. She hated glasses because they made her feel old and ugly not to mention that she couldn’t see her kids grow up! 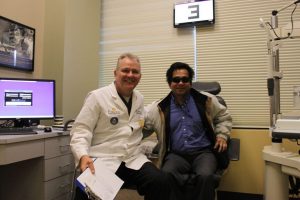 Nate Tran served over 20 years in the United States Navy as a Hospital Corpsman (8404) providing emergency medical and dental assistant and physical readiness for Marines in Camp Pendleton, California and Okinawa, Japan.

Nate also worked two years as a certified Combat Lifesaver Instructor.  Due to several service connected injuries, he became a disabled veteran and his eyesight also got blurry.  He plans to continue learning new skills while raising his three children. And he loves being able to wear sunglasses now!

TWO of our 2017 Patient Stories 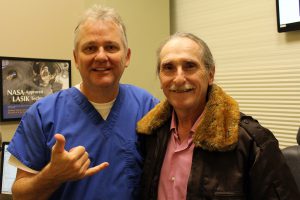 Hank Provost served in the Air Force from 1974 to1981 as an electronics technician trained in solid-state theory. As a Communication Commander, Hank was in charge of a squadron of 500 at Keesler Air Force Base in Mississippi and was a Kent State massacre and Iran hostage crisis activist. After his service, Hank worked at a subsidiary of Lockheed in top-secret communications for the shuttle program. Hank was so surprised at how painless the surgery was and said that even an eyelash in his eye was more painful!

Hear Hank’s story about serving seven years in the Air Force and now loving to roller blade without his glasses! 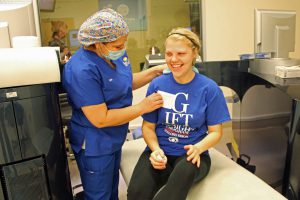 Ilga Hernandez, a Santa Cruz, native, was legally blind without glasses or contacts.. Playing sports was a big challenge especially basketball and swimming. Ilga loves to sing and is a member of Pacific Voices, a non-profit community choir in Santa Cruz.

Ilga has been a patient of Plager Vision since she was eight years old and says she was so lucky to have Dr. Bailey recommend her for the Gift of Sight Program. One day after her surgery, she said that she could not express how much it has already changed her life.  “I’m so excited!”

Our Promise to You

about transforming your life through excellent eye care and exemplary service.

to providing you with the time and attention you deserve to make the right choice for your eyes.

to treating you and your referring doctor with enthusiasm and integrity so you want to share your experience.